Many things have transpired since my previous Streaming Media article, Is Virtual Reality Streaming Ready for Primetime?, appeared last November. In that article, I predicted that when YouTube provided a platform for virtual reality (VR) content, VR would be poised to enter the mainstream. Eight months later, with YouTube allowing users to livestream 360° VR videos, we can see a path to mass consumer adoption.

VR remains a niche market at this writing, but it’s a growing one with huge potential. Several consumer headsets and VR cameras are now available to ship to consumers. According to Forrester Research, there will be 52 million headsets sold by 2020. Other analysts are predicting 171 million headsets sold by 2018. Either way, analysts are bullish about the overall growth of the VR industry.

There is an ongoing debate whether 360° video is truly VR. I consider it a subset of VR that will have its place in live events such as sports, concerts, lectures, religious events, training, conferencing, and cinematic experiences. In this article, I will focus primarily on recorded and live 360° video. 360° video will expand VR beyond the gaming industry and usher in new uses, which will have a positive net effect for consumers and businesses alike. But before we get there, we’ll face several challenges.

Battle of the Headsets: Standardization and Compatibility Still Lacking

After much anticipation, the desktop consumer versions of the Oculus Rift CV1, HTC Vive, and the Samsung Gear VR (powered by its Galaxy line of mobile phones) have hit the shelves with great fanfare and even controversy. Despite the fact that many of the manufacturers have not released official sell-through numbers, it’s estimated that several million headsets have already been sold. Facebook recently stated that there were more than 1 million users of the Gear VR (Figure 1, below) alone. 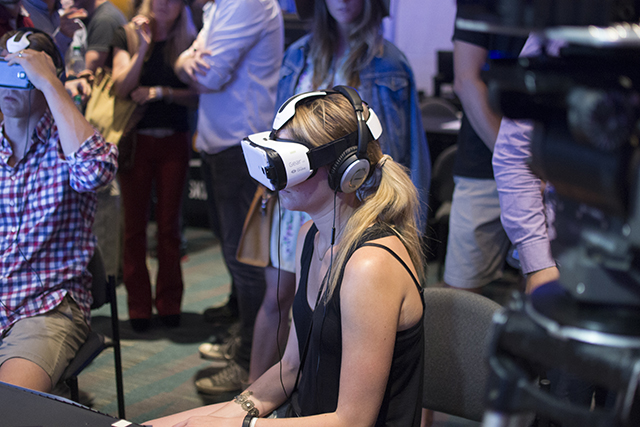 On its launch, the Oculus Rift CV1 had some manufacturing and shipping issues. Oculus was not able to initially fulfill preorders, which frustrated many buyers. In addition, Oculus launched an update to its Oculus Home storefront that no longer supported Revive, an app that allowed games and content on to run on the competing HTC Vive headset (Figure 2, below).

Oculus distributes software through Oculus Home, while the HTC’s Vive is designed to work with Valve’s Steam platform. However, Valve has made conscious efforts for its software to work with the Oculus headset. Since each system is PC-based, technically, any software or game made by Oculus can work with HTC Vive and vice versa.

Consumer platforms for VR by Oculus, HTC, and Sony take a walled-garden approach to delivering content, which leads to fragmentation and confusion.

Microsoft is addressing this fragmentation with its Windows Holographic platform, which supports the HoloLens and enables developers to build their own compatible augmented reality (AR) and VR headsets. Microsoft’s goal is to provide the operating system for VR and let other companies develop the software, hardware, or other peripherals.

Google recently announced that it’s going all-in with a full VR ecosystem for Android called Daydream. Daydream, a VR platform that includes hardware and software, is set to be released in 3Q 2016. Google has yet to unveil the necessary hardware and specific details of its platform. Daydream will not support current mobile phones, but Google’s intention is to set a new standard for the next generation of VR-optimized Android OS and hardware.

Major players such as Facebook (Oculus), Google (YouTube), HTC (Steam), Sony, Microsoft, and Samsung are vying to set the standards for VR, but it’s too early to identify a clear winner since everything is currently in flux. Only when a specific platform gains traction will mass adoption begin.

Right now, the prohibitive cost of hardware is preventing wider consumer adoption of VR. For optimum VR performance, you need a powerful PC, such as an Intel Core i5-4590 equivalent or greater with a high-end graphics card such as the NVIDIA GeForce GTX 970, AMD Radeon 290, or AMD Radeon R9 280. In addition, you need to purchase a VR headset, which costs at least $599.

Fortunately, NVIDIA has launched a new line of graphics processing units (GPUs) based on the company’s Pascal architecture, which can handle VR at a reasonable cost. These VR-ready GPUs include the GeForce GTX 1080 ($599) and GeForce GTX 1070 ($279–$449). AMD has announced the Radeon RX-480 line of VR-capable cards based on its Polaris architecture, with pricing starting at $199. Soon we’ll reach the point where reduced hardware costs will make VR much more affordable for the average buyer.

Even as future VR headsets integrate more powerful CPUs and GPUs, they may well be overtaken by more powerful mobile phones. Currently, mobile VR has some disadvantages when compared with the Rift, Vive, and PlayStation VR, such as limited battery life, lack of positional tracking, and limited graphics and resolution.

Mobile VR does have its advantages, such as lower cost, accessibility, and portability, since you don’t have to be tethered to an expensive and unwieldy desktop system. Samsung is even giving away headsets with its mobile phones, which is a win for the consumers and conveniently introduces them to what VR has to offer.

Ultimately, I suspect, mobile VR will supersede desktop VR as a consumer platform when the advancement of mobile hardware and software closes the gap between the desktop and mobile.

Apple Needs to Get Into the Game

We have yet to see any VR hardware or software from Apple, but it’s only a matter of time before the company throws its hat into the ring. It is rumored that Apple is developing a complete ecosystem for iOS. An Apple VR headset is on the horizon, with a prospective release date of 2017.

In its current state, iOS is not as robust as Android, since Apple is not attempting to support VR video, especially in the browser. Safari has not been updated and has little or no support of 360° video playback, although Chrome can handle VR video on iOS. Until Apple fully embraces VR, its large mobile userbase will have limited opportunities to participate in the growth of VR.

There are several new cameras available that make VR video easier to create for professionals and consumers alike. Creating 360° video is difficult, but many manufacturers are coming out of the woodwork and presenting their own solutions.

VideoStitch is another contender with its Orah 4i (Figure 3, below), now available for preorder at $1,995. The Orah 4i is a prosumer VR camera that allows for real¬-time capture and streaming of full spherical 360° video in 4K. 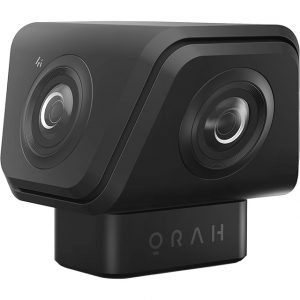 Consumers are an important market for VR, and getting them involved in creating videos is the key to growing the industry. More commercial and user-generated content will substantially generate more interest and increase audience size.

At this writing, there are limited choices for streaming 360° VR, but YouTube’s Live 360 is leading the way in delivering a complete solution for creators and consumers, with Facebook in hot pursuit. YouTube Live 360 supports playback of 360° videos in 1440p/60fps resolution for live streams on computers in Chrome, Firefox, Internet Explorer, and Opera, as well as YouTube and YouTube Gaming apps for Android and iOS. Chrome has implemented full support for 360° video, but technical issues remain on iOS with the Safari browser when viewing 360° video.

YouTube’s Live 360 will even work with low-cost cameras, and its application programming interface (API) enables any camera manufacturer to send video to Live 360. Facebook will expand its VR products with 360° video and plans to include live streaming 360° video as well.

As this new VR medium emerges, content producers are still experimenting with how to use the technology to convey their stories. There is a steep learning curve, and creators are optimizing and fine-tuning VR’s narrative language through trial and error.

These producers are facing some limitations that they have to overcome. VR video is more of a static experience than video that involves more switching and camera movement. Once viewers tire of the initial thrill, they will demand more interactivity and will look to experience content with more substance (Figure 5, below). VR content creators will need to step up the quality of their productions substantially as they master the various production technologies and learn to use them more effectively.

Figure 5. The goal of VR content development, as ever, is to deliver a fully immersive experience.

In order for creators to produce better content, they’ll need better postproduction software for VR 3D-360° production, since most VR postproduction to date has been based on clumsy workarounds and plug-ins with limited features.

Most of the VR editing process consists of using source files in disparate traditional applications. Editing may be done in Adobe Premiere Pro CC, compositing in Nuke, and color grading in DaVinci Resolve, although none of these applications is VR-native.

That said, companies are finally adding features to their future production software suites. Adobe is including VR editing with Premiere Pro CC, and Nuke is allowing for compositing and visual effects to be integrated into VR files. Assimilate’s SCRATCH VR suite looks promising, since it’s designed for real-time VR postproduction and allows you to play back, edit, composite, and color-grade while using an Oculus Rift.

There is an immediate need for Final Cut Pro or After Effects to add functionality to enable VR editors to drop in various sequences and sound and edit them in VR space. Once the postproduction workflow has been established, there will be more content available with better production values.

Technical Hurdles: Resolution
The resolution of the Oculus CV1 and HTC Vive is 2160×1200 pixels. Delivering a more realistic VR experience will require higher-resolution displays, since most of the headsets on the market exhibit the screen-door effect, where the delineation of pixels is visible in the image.

Next-generation screens from Samsung can overcome this effect since they feature ultra-high definition (UHD) 3840×2160 in a 5.5″ display. These displays feature a 44.7% increase in pixel density (806ppi) over the previous generation, in addition to sporting an extremely bright image with high contrast and exceptional color.

Once the visuals improve, VR will appeal to more consumers, since the technology will no longer be a distraction to the actual experience.

VR audio is as important as video to complete the experience for total immersion. YouTube 360 Live currently doesn’t support directional audio, but eventually it will, since YouTube now supports directional audio for prerecorded VR video content. Directional audio should be standardized for all VR video platforms.

According to Akamai, the average internet speed in an America home is 12.5Mbps. For mobile phones on a 4G network, download speeds are averaging 4Mbps–12 Mbps. Carriers are touting 20Mbps–50Mbps download speeds, but these speeds are available only under ideal conditions. High-quality 360° VR videos mostly require 4K resolution at bitrates of at least 25Mbps. To deliver truly immersive 360° video, bandwidth, stability, and efficient codecs must improve across the board, which is currently a work in progress for most carriers.

These bandwidth barriers are effectively limiting viewing of VR live streaming for most individuals. Most people can view lower-quality streams, but the resolution leaves much to be desired.

Companies such as Facebook are deploying a solution called dynamic streaming, which maps the viewport to a pyramid and switches and processes the view in real time depending on where you’re looking. This allows users to view the video in higher resolution at reduced bandwidth.

VR is the new frontier for live streaming and online video. We’re in the midst of an evolutionary process, since manufacturers are still shaping the technology and producers are still exploring the methods of crafting a story and creating content. Developers in all aspects of VR must master the inconsistencies and the pain points in order for VR to achieve mainstream adoption. The whole process, from content creation to content consumption, will be simpler over time.

VR will eventually achieve ubiquity and acceptance as simply another way to experience content. At that point, it will, most likely, supplant other forms of media. Once compelling VR content is readily available and becomes an experience that consumers really want, it will finally be ready for prime time.